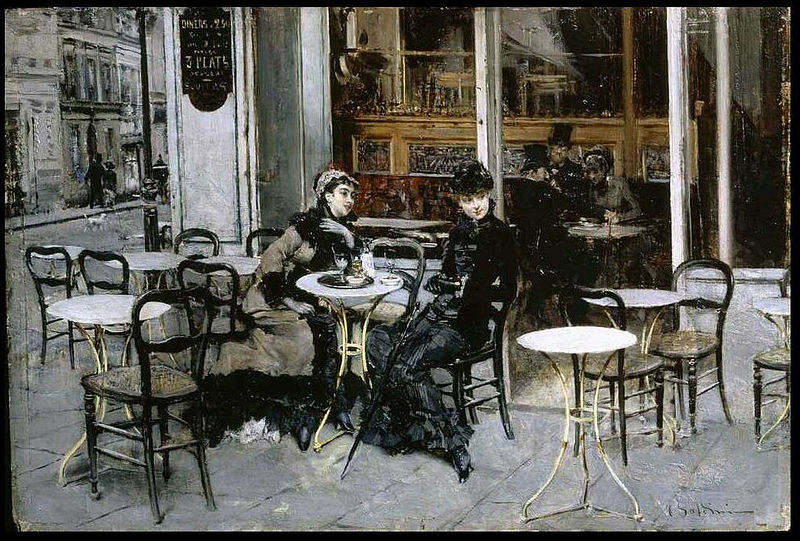 1850: The worn wheels of the ragged peddler’s push chart hardly made more than a dull clunk-thud on the broken cobblestones of the narrow London alley. At this early winter’s dusk, the gas lighter’s form could be seen stepping down from his ladder, propped up against the wrought iron streetlight. Through the dirty glass of the glass cover the gas flame could be seen to flare and then stabilize, casting it’s pasty glow, throwing it onto the window of the building opposite, whereupon its illumination was lost in the glare of the distorted light emanating from the interior of the coffee shop. Though the peddler would never get to sit in the over-stuffed winged armchairs being enjoyed by the foreign businessmen who had entered the establishment no more than 10 minutes ago, he could almost taste the bittersweet coffee as its steam swirled up from the cups held out by the expectant recipient, disseminating its rich pungent flavor into the smoky interior, and out through the door and into the alley.

2001: The young man walked down the street running alongside the canal. He was visiting from out of town, and not much more than a stone’s throw away from the home of Rembrandt, he was to observe the goings on, the activities of this Dutch coffeeshop. Like everyone else, however, it was not coffee that he was there for, but the other stuff, only recently legalized in this part of northern Europe. He positioned himself at the junction of two buildings across the street, trying to hide in an imaginary invisibility cloak as he watched people file in. He wanted to see them enter and then, after a while, 30-45 minutes at the most, he imagined, see how they come out, back into the clean atmosphere of the city, glassy eyed but slightly more relaxed. A couple, probably in their late 20’s, he with a jet black goatee and a waistcoat, she with large hooped earrings and a jauntily positioned cap on her head, pushed through the wooden door of the shop front. A bell rang in the back, announcing them, as they entered. The young man was sure that he could smell the ‘coffee’ as its aroma wafted out into the street; or perhaps it was just his imagination… wishful thinking perhaps?

2019: I walked through the lobby of the hotel, weaving between lawyers, stewards and bellboys. The lawyers, some dressed carelessly as if they were about to embark on a weekend house painting project, while others seemingly dressed for Court, were seated wherever they could find room. Three on a couch here, two standing at a bar table over there, another couple leaning against the concierge’s desk. At this point of the proceedings, any place and position that sufficed for what would pass for a networking meeting was fine. At least, as long as you didn’t mind the din and mayhem of hundreds of people trying to talk at once. And those who weren’t chatting were constantly on the move, looking for their meeting dates.

I finally found the green sign that I had been looking for. There it was, announcing that if I wanted to join the line of people, a veritable human snake, waiting for service, then this was the place. As I approached, I noticed some colleagues, a familiar face from 20 years ago, whom I’d only ever seen at one of these things. He was accompanied by a young man. Mm, I thought. This is probably his first time.

The minutes passed, Russian to my left, interspersed with Spanish (Argentinian or European? I wondered), together with the unmistakable Australian drawl two people back, and the Boston ‘yaard’ coming from just behind the counter. I moved slowly towards the sign, noting the offerings and their prices posted on the wall just behind the Bostonians. The woman in front mouthed to her companion “here, tall means small; grande means medium”. I smiled to myself. As it was my turn, I announced “tall latte, please”, thinking that with this socially acceptable doublespeak having become the norm, 1984 had finally come, as it always did, whenever I visited one of these multinational diplomatic missions.

But now, in the convention hotel of INTA 2019, this establishment had a name: Starbucks. I had finally arrived… ready to spend a few days of quality time with 10,000 of my closest friends….