Recently, I had the privilege to speak about Cannabis and Intellectual Property in the city where my office is located, Jerusalem, Israel, at a meetup dedicated to Jerusalem businesses in the biomedical and cannabis fields, sponsored by JLM Biocity.

While preparing to speak, I realized that according to some opinions, Jerusalem had a long history of cannabis use. The book of Exodus (30:23) describes the anointing oil that was used to anoint the vessels Tabernacle and the priests, and was later used in Jerusalem to anoint High Priests in the Holy Temple and kings, including David (1 Samuel 16:13). Four spices are listed in the Bible’s recipe, and one of them is called “Keneh-Bosem” which can be loosely translated as “fragrant cane.” Some commentators identify it as cannabis, pointing out the phonetic similarity in name.

The ancient recipe, including ingredients and amounts, is disclosed, but is also preserved by prohibiting the making or using of the anointing oil for private use, and sanctioning one who does so. Perhaps Exodus teaches an ancient precedent of intellectual property protection by describing a predecessor of a patent.

Since ancient times, the use of patents to protect cannabis-related intellectual property has only increased, albeit the sanctions for infringement have changed, and once again, it seems that Israel is on the forefront of research, development, and patenting in the Cannabis field, as illustrated in the below graph. 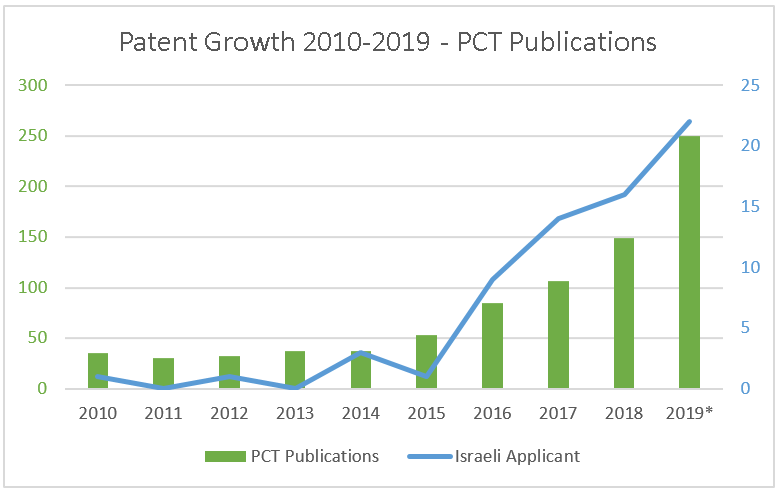 In addition to discussing past and present cannabis IP trends, my presentation focused on legal developments in the United States, and particularly relating to the enforceability of US Patent 9,730,911. In this recent case of infringement of a patent between two Colorado companies, United Cannabis Corp. and Pure Hemp Collective Inc. a decision was given in which the defendant’s motion for partial summary judgement on basis of “patentable subject matter” was denied. This decision paves the way for further legal proceedings relating to cannabis formulations.

Finally, I think it’s important to emphasize that in addition to composition patents, other methods exist for protecting cannabis-related inventions. New varieties of plants can be protected using plant patents or plant breeders’ rights. Methods for manufacture, purification, and growing can be patented in utility patents. Various devices for vaporization, preparation, and growing of cannabis can also be patented. Novel methods for treatment using cannabis, or active cannabinoids combinations for treating diseases may also be patented.

To find out more about cannabis-related intellectual property, feel free to reach out to me at avraham.hermon@jmbdavis.com.